Yes, I've done it again! Sewn Vogue pattern 1314, that is :) I was particularly inspired by another PR member, mimig. Her version made me want a summery dress in a floral print. I was at Fabricville a few weeks ago and this gorgeous fabric had just come out as part of their Spring line.


As soon as I laid eyes on it, I knew I would be using it to make this pattern again. Not to sound like a cheap-skate, but I admit, I usually buy fabric on sale.  However, I was so gung-ho to make this dress, I couldn't wait! Well, I didn't buy it at *full* price since I have a membership card at Fabricville. Members get at least 20% off reg price, but I frequently take advantage of the buy 1m, get 2m free sales :) It's still winter here in Nova Scotia, Canada, but before you know it, it'll be time to break out the Summer wear! I'm ahead of the game :) 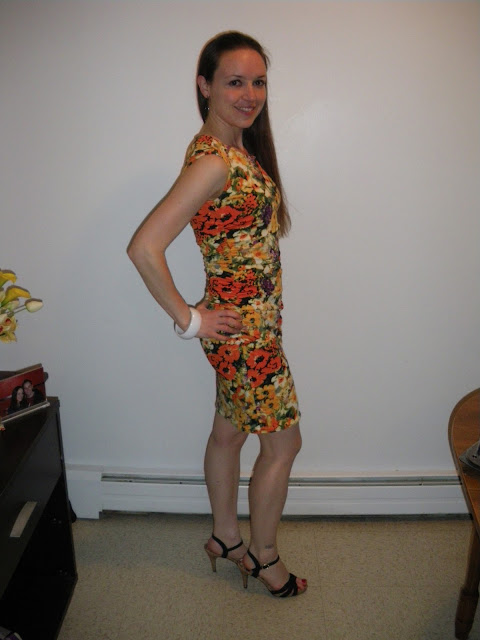 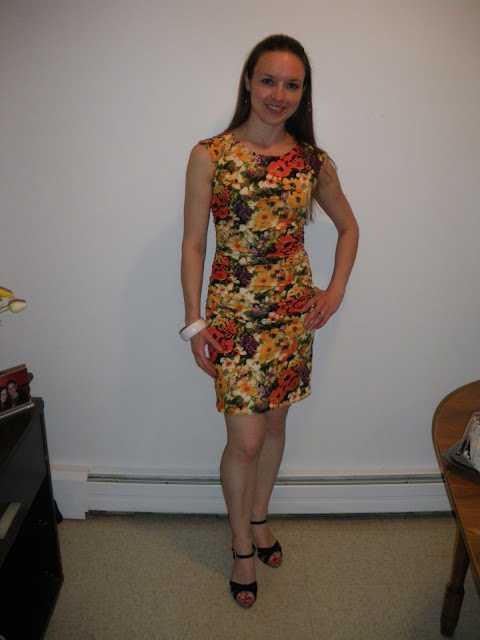 I think I should have made the dress a touch longer, but oh well! I'll keep that in mind for the next project :)

Even though its sub-zero temperatures (as in Celsius, not Fahrenheit) :) at the moment, come summer brings,  well... summer weather! And around here in NS, it's not only hot, but hot and humid (some days, disgustingly so). Ugh, I could sweat just thinking about it! I knew if I was making a tight-fitting dress for summer, it had to have very short sleeves. I really liked the cap sleeves on McCalls 6243 (made earlier this year), so I adjusted Vogue 1314 to be similar. 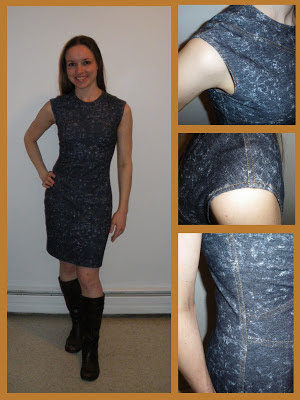 To adjust the sleeve, I traced the sleeve curve of McCalls
6243 and kinda redrew where I thought the line should be on V 1314. This is the first time I've done an adjustment like this, and I'm not sure what the "proper" way of doing it is, but it worked OK for me :) 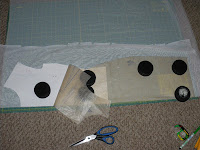 In the photo to the right, I have the re-drafted front top-half laid
underneath the Vogue front pattern piece. Can you tell I'm an amateur? :) And in case you're wondering, yes, those are hockey pucks that I'm using for pattern weights :) A *very* helpful tip I picked up from the "Tips" book put out by PatternReview.com. I despise pinning, so I almost always use hockey pucks and a rotary cutter.

Anyone else have cats that like to make themselves comfortable on your fabric and/or pattern tissue paper? This here is Chewfoot (yes Chewfoot, as a kitten he liked to chew on Dan and I's feet, hence the name :)

This here's the lining. It's called "power mesh". Likely meant for sports-wear I suppose. Chenille from PR used it for her dress, and I thought it would be perfect for warm weather :)


For this dress I used clear elastic to do the gathers. ggf2005 on PR used it for hers, and I figured if its good enough for an expert, that's good enough for me :) There are great tutorials online on how to use clear elastic, so I won't elaborate. Below are photos taken during the process :)

*Note* I probably should have gathered each side of the front and back separately (as per pattern instructions) to have the most even gathering, and it would have been easier to maneuver the elastic with one layer of fabric instead of two, but I was just a *little* impatient. I think it worked out alright, though I think I'll gather separately next time :)

What can I say? I love my kitties :) Here is Caper (I named her Caper because I'm from Cape Breton, and I thought it was cute :) The cats like to keep me company while I sew.


The pattern has you bind the neckline, and I did the same for the armhole since I didn't want to use a narrow hem. I thought it would make a nicer finish, but it ended up being a bit too bulky for my taste. I'll have to think of a better way for next time, or maybe use a thinner fabric for binding.

I like to use hockey pucks to help set pressed seams. Hey, it works for me! :)


I under-stitched the armhole facings similar to what the directions have you to do to the neckline. I found it was easier to under-stitch from the inside as I trimmed the seams too much beforehand :(. The other arm was way worse! Turned out alright though in end :)


I  mistakingly stretched a spot in back on the neckline while sewing on the neckband :( Its a little wobbly-looking, but once I pressed it and turned it to the inside, it wasn't as noticeable. It didn't bother me enough to take out all that stitching :/ 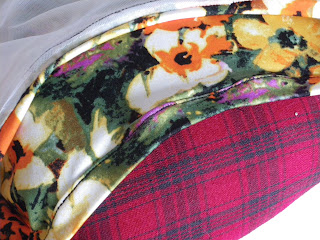 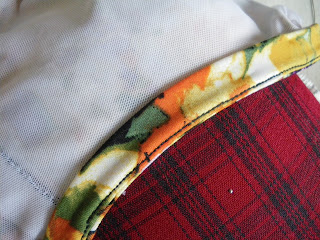 I used steam a seam on the neckline, but it didn't turn out as good as I had hoped :( It wasn't laying flat enough, so I topstitched with a double needle, and it helped a lot.  It doesn't lie completely flat, but since its in the back, it stretches to lie flat over my upper back and my hair covers it too :)


Steam as seam was helpful for my lining hem however :) 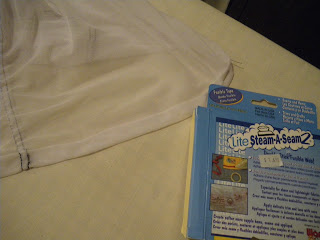 I just love the look of topstitching with a double-needle. Gives it a more RTW look :) 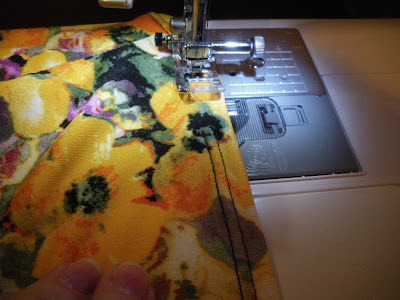 Yay its done! I can see myself using this pattern again (and again, and again...)