"Jesus said to him, "I AM the way, the truth, and the life. No one comes to the Father except through Me."

"The the Jews said to Him, "You are not yet fifty years old, and You have seen Abraham?"
"Truly, truly, I tell you," Jesus declared, "before Abraham was born, I AM!"

Hey my lovely readers!:) I hope you all had a wonderful Holiday Season! I spent Christmas with my husband's family this year and while we were away I entered a contest on Instagram and won a pattern! Its this knockout bodycon-style "Priscilla Dress" by Rosy @ https://www.rosypenapatterns.com/. I've been following Rosy's Youtube Channel for a few months now. Sewing Vlogs in general are my new favourite thing, lol:) I'm almost 20 weeks pregnant now (so about halfway through!) so I knew I wouldn't be able to fit in the pattern as-is, but I was so smitten by it that I planned immediately to make it baby-friendly so I could wear it now:)

I did some research on making maternity clothing and studied RTW tops I have and ended up starting with the the size Small (though I could have used the XS) adding three inches of length to the midsection of the front dress piece only, and adding width for my tummy. I'll post a few photos below to show give a better idea of how to go about it if you're looking to pattern-hack for maternity:) I must say I *really* wanted to make my dress with a turtle-neck, however, even though the pregnancy-related nausea has passed for the most part, I still can't tolerate anything tight around my neck (major gag-reflex:p). I decided to cut a scoop neck instead. I simply cut a band and faced the neckline. 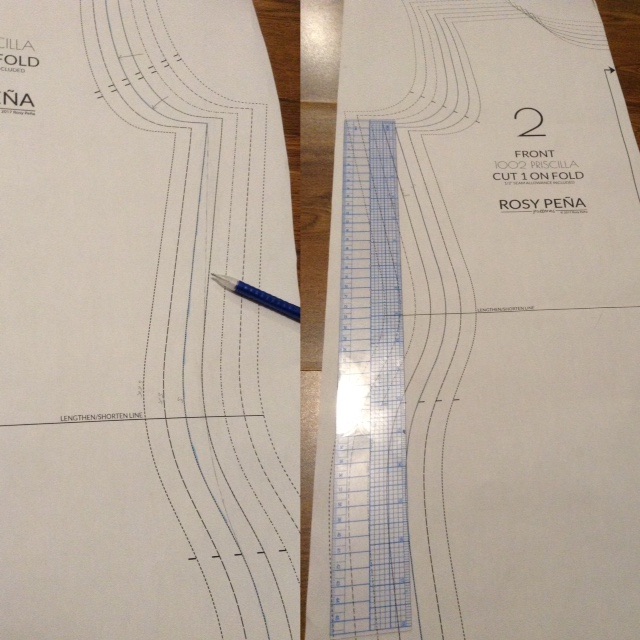 As you can see, I just drew a straight line from underneath the armhole to the hip. I have a Burda maternity top pattern that I've used in the past that is similar to this, but I'm not as far along as I was when I used it last, so I ended up taking the dress in a bit. I cut a horizontal line about midway between the lengthen/shorten line and added three inches and gathered the front & sewed the front and back together. 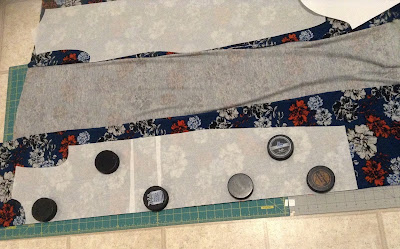 If you've ever worn a maternity top/dress, with gathering at the midsection, the front and back are often both gathered. If I had used a thinner polyester/spandex knit I may have lengthened both front and back pieces and gathered, but since I was using a thicker sweater-type knit (this is a rayon/polyester knit from Fabricville), I didn't want bunching at my lower back. I wanted it to fit as smoothly as possible.

Well, I hope that helps someone!:) Next up is sewing a couple of dresses for The Day&NightDressChallenge hosted by Elizabeth at elizabethmadethis.com. Challenge video here.She's *so* talented! Her makes just blow me away! She also has a fantastic Youtube Channel which I follow. I just love the online sewing community! Sewing is pretty much a solo activity (and I don't personally know a lot of people who garment sew), so its nice to connect with others on blogs, Instagram, Facebook groups, etc.

Well, thats it for today:) Have a great week everyone!