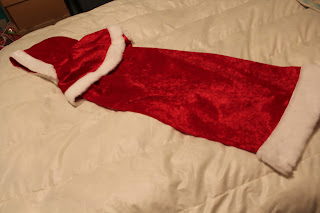 Hello sewing friends!:) This was my main project last month. I made this "Winter Belle Cape" for my 4 year old niece as a Christmas gift. I knew I wanted to make her one some time ago, so I was pretty excited about it! I had to wing it since I couldn't find an actual "Belle Cape" pattern, but I used McCalls 6196 as a good base. The main fabric was a deep red panne velour and I decided to line it with a novelty satin-type fabric, just to complicate things for myself!;) I purchased a cut of faux fur since the fur trim that was available in spools was all long pile and I wanted the cape to look as much like Belle's as possible. I used the smallest size after reading some reviews for this pattern. I think I cut the fur in strips of 2 or 2.5 inches with the bottom under-cape trim 3" (I think!). 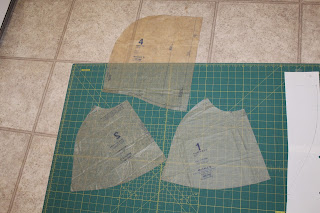 Here shown is the pattern pieces for the hood and altered "caplet". I used the measurement from my niece's elbow to wrist and subtracted that amount (plus an inch more I think), so the caplet would come slightly above her elbow. 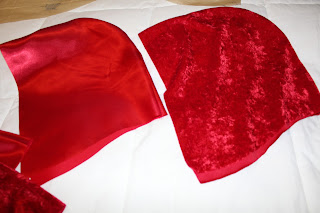 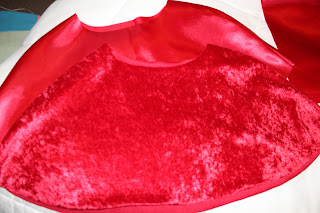 Above is shown the two main caplet pieces. I sewed the front and back pieces together on both lining and main pattern piece then sewed them right sides together along the bottom and turned right-side out and basted the pieces at the neckline. 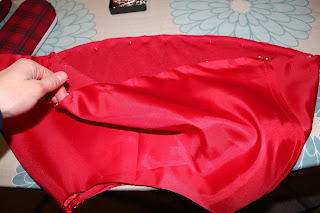 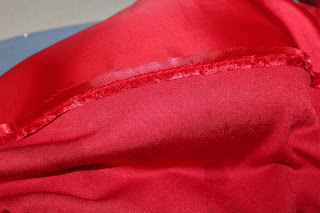 Pressed bottom of caplet inside and trimmed seam allowance. 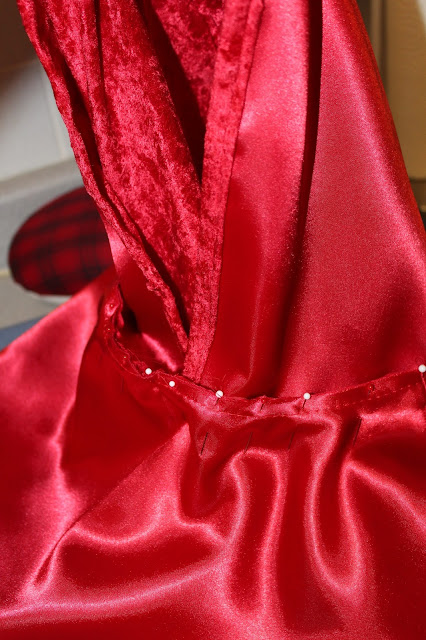 Here you can see how I attached the hood and caplet. I later added an "under cape" from another pattern in such a way that the raw seam was hidden. I though I had taken photos of that part but I must not have:( 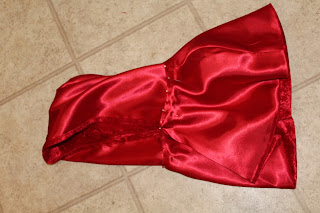 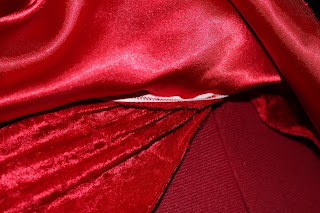 I added some twill tape to the neckline, as it didn't seem particularly stable. Here is the "under cape" and caplet lining with the attached twill tape. 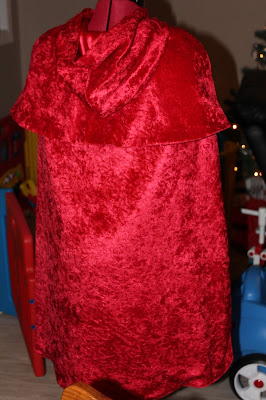 For the under-cape I followed part of a tutorial for a "Anna" (from Frozen) cape, but I wish I had made the under cape a bit wider. This is ok, but I think it would have been better to use a full "red riding hood" type cape so it would go over the shoulders better. I made it so the under cape would fall at my niece's ankles. 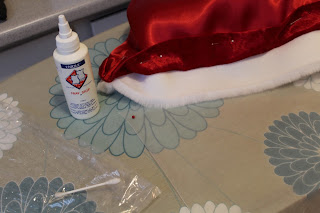 I was going to hand-sew the trim on, but I quickly realized it would be far too time-consuming so I simply used my sewing machine!:) I applied fray check to both the cut top and bottom edges (this should be done before sewing on the trim. Only after I sewed some trim on the first section did I realize the bottom needed fray check as well. 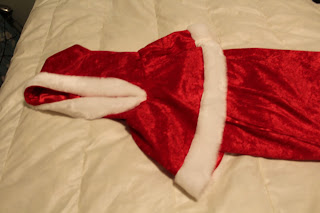 I both machine sewed and hand-sewed the trim on the hood. Machine sewn along the edge and secured the rest by hand. I left the trim around the caplet hang free for the most part but secured it in a few spots. I machine and hand sewed the trim to the under cape as well. 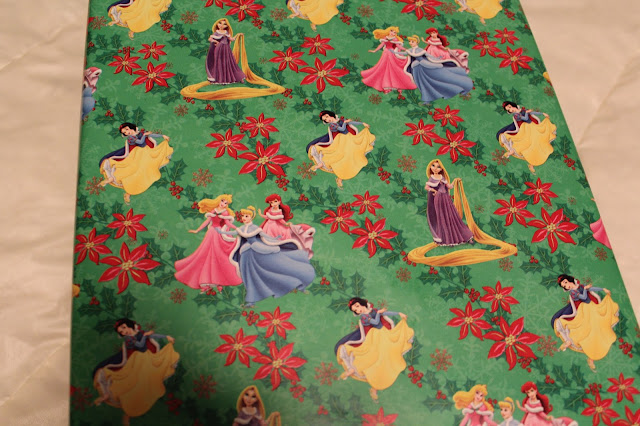 How perfect is this wrapping paper? Bonus, I already had it on-hand! Disney princesses in their winter capes! Funny though, that Belle is the only character that actually had a winter cape but she's not featured??

I wish I had gotten a photo of this on the dress form! *Sigh*. Oh well, turned out pretty well I think! Now I can work on sewing for myself;) Til next time!:)