"This is a trustworthy saying, worthy of full acceptance: Christ Jesus came into the world to save sinners, of whom I am the worst. But for this very reason I was shown mercy, so that in me, the worst of sinners, Christ Jesus might display His perfect patience, as an example to those who would believe in Him for eternal life. Now to the King eternal, immortal, and invisible, the only God, be honour and glory forever and ever. Amen."


Hello my beautiful sewing friends!:) This African sheath dress has been a month in the making! My sewing group has monthly challenges and September was African print/Vintage. I really wanted to make an African style dress and was gifted this great cotton by a friend from my church! She often wears fab African style clothing so I asked her if she knew where I could get a nice African print (I wasn't crazy about anything I could find in my local stores). She offered me one of her head wraps since she doesn't wear them! It was a nice big piece of fabric that was large enough for me use for this sheath dress! I must keep that in mind for the future, ordering a head wrap to use for fabric for a project!:) I used this sheath dress pattern for my European Vacation dress as well (making a separate post for that one). I made two muslins to check the fit, so now I'm kind of sheath dressed out, lol. I do plan to make more of these dresses in the future though. A sheath dress is definitely a good staple pattern to have. I plan to perfect the fit and trace a sturdy copy on freezer paper. I'd like to do a rounded neckline as well.


I was almost done when I realized I could probably use a belt to break up the busy "optical-illusion" print. I used an older Mimi G Obi Belt Tutorial/Pattern. I self-lined the belt instead of just turning the edges over and hemming. I used knit interfacing on the backs of both middle pieces (not the ties) since my fabric seemed a little too lightweight. The fabric was from my stash & has a velvety feel and doesn't fray. It was tricky to press, but I managed, lol. I topstitched to reduce puffiness. I'd love to make another in a nice leather or faux leather:) A denim would be cool too!:) Even with the extra steps I took, this is a quick project that can easily be done in an afternoon/evening (or during your child's nap time:) 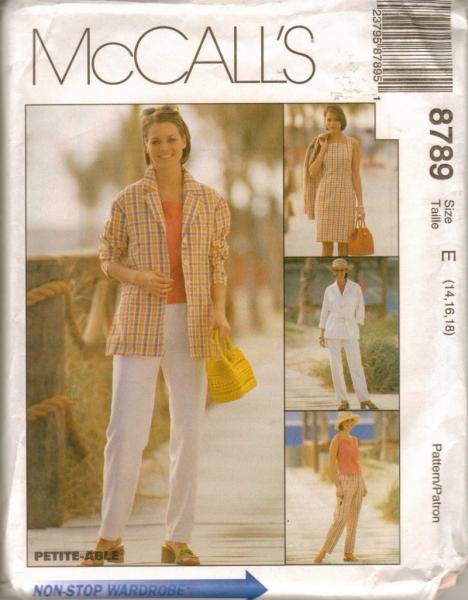 I found this pattern at a thrift store (image from Google). I had some issues with neck gape/ swayback which I will work out further. I found that an 8 up top and 10 at the hip seemed to work pretty good. I **looove** finding patterns and fabric at thrift stores!:D Its so exciting, lol!

I should mention that a square neck sheath dress (different pattern) was my first attempt at garment sewing years ago. My favourite RTW sheath had literally wore out and I wanted to recreate the look. I had no idea how to make fit adjustments then & it was a total flop, lol. Immediately I turned to sewing with knits which was much easier!

I didn't really try to line up the print in the CB seam but I did attempt to at least make sure the darker border was positioned the same on both sides. I sheepishly admit that I discovered I still had pins in the back when I got to church Sunday! Lol. At least they didn't jab me too hard;) I was in the back area so I don't think anyone noticed me taking them out!

Well thats it for today! I'm going to blog about my other dress soon & I already have another project cut out and ready to sew tonight! A knit this time:) So how about you? What was your first garment attempt and was it wearable?;) How long did it take to sew something you could confidently don in public?:) Sewing is a skill that definitely takes practice, but its not as difficult as some people think. If I can learn to sew anyone can!

Have a blessed day everyone! xo