Wow, October is here yet again! And you know what *that* means??? Ohhh yeah!! It's costume time!!:) Yay!! This year, not only do I get to make *myself* a costume;), I also got to make one for my little Isaac! Dan and I were out shopping at Costco last week and there were a few inexpensive costumes out for baby, but what fun would that be?;) Besides, I'm going as Ariel, so I thought it would be fun to do a theme! I considered making a crab costume, but Flounder won out:)


Soooo, I scoured the internet for ideas for Isaac's costume. Although mermaid costume tutorials  abound on the world-wide-web, there's next to nothing for Flounder! I did find a couple of costume images that I used as a guide: 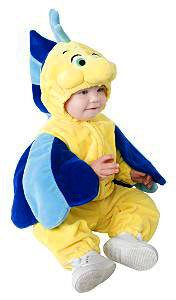 ....and this one which is actually my favourite one that I've seen. I couldn't find anything but the photo (no accompanying blog post:(. It was helpful as a reference though. If Isaac was younger, I probably would've made him a bunting costume like this. 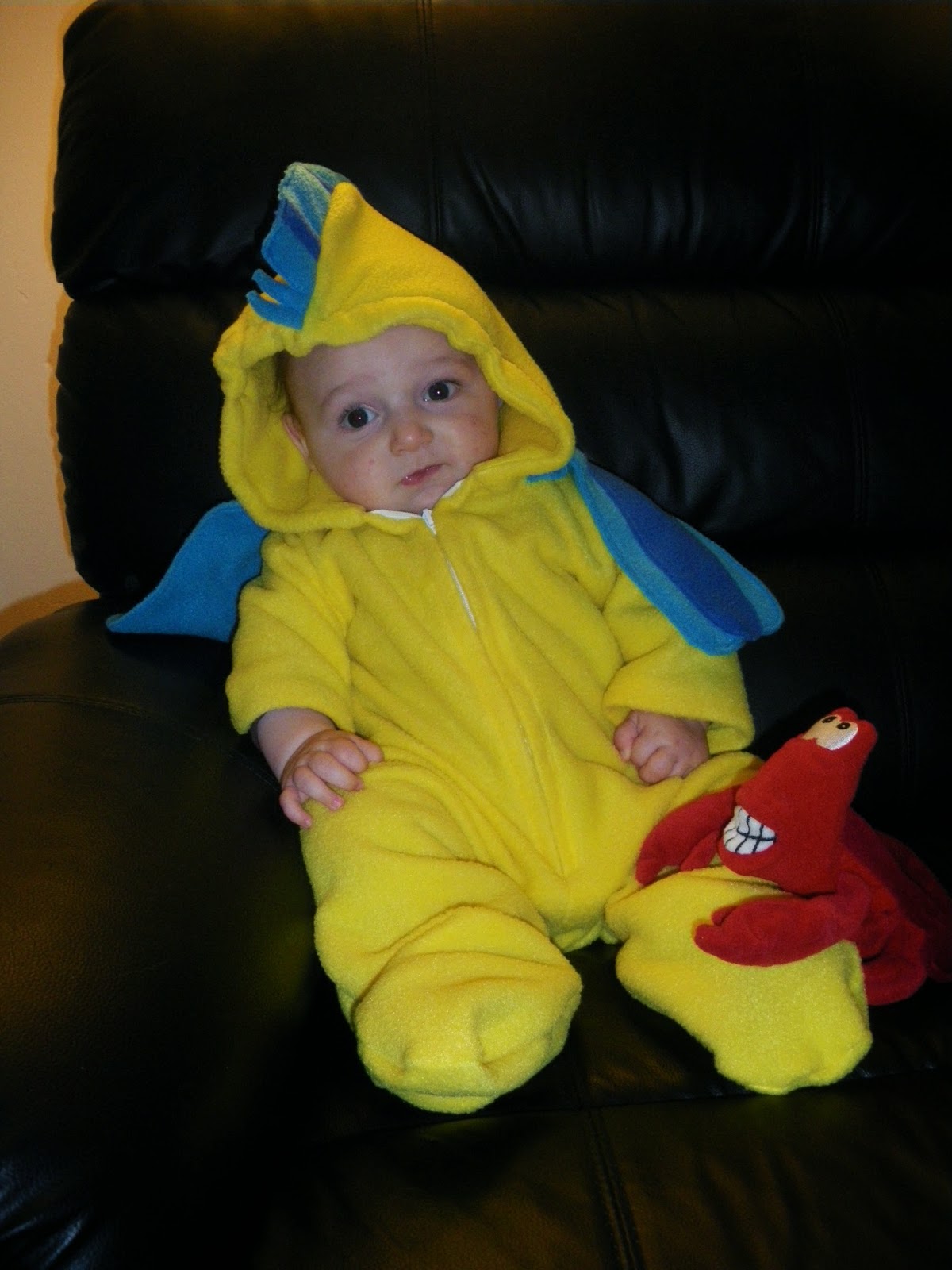 The resulting costume, doesn't he look thrilled??:) Oh well, at least Sabastian does;). I actually purchased this Sabastian online, to go with our costumes:)


My review on PR here.


I used a basic one-piece baby costume pattern, Simplicity 1767, and added fins on the arms, tail & head to resemble Flounder. This is a pretty easy pattern, especially if you follow it for one of the views listed. Even with my modifications, I was surprised that I finished it over the course of a few days (which is fast for me!:). I started it on Monday and posted photos on Facebook last night (Wednesday) !:)

I'm going to make something of a disclaimer here: I probably made this process a whole lot more difficult than it needed to be. I've never sewn any type of clothing for a baby, certainly not a costume, so it was a lot of trial and error since I think I botched the sizing (yes, on such a simple pattern, I admit it!). This isn't a tutorial per say, but I'd like to share my process. There's not a whole lot out there online for a Flounder costume, so this might prove helpful to someone!:) 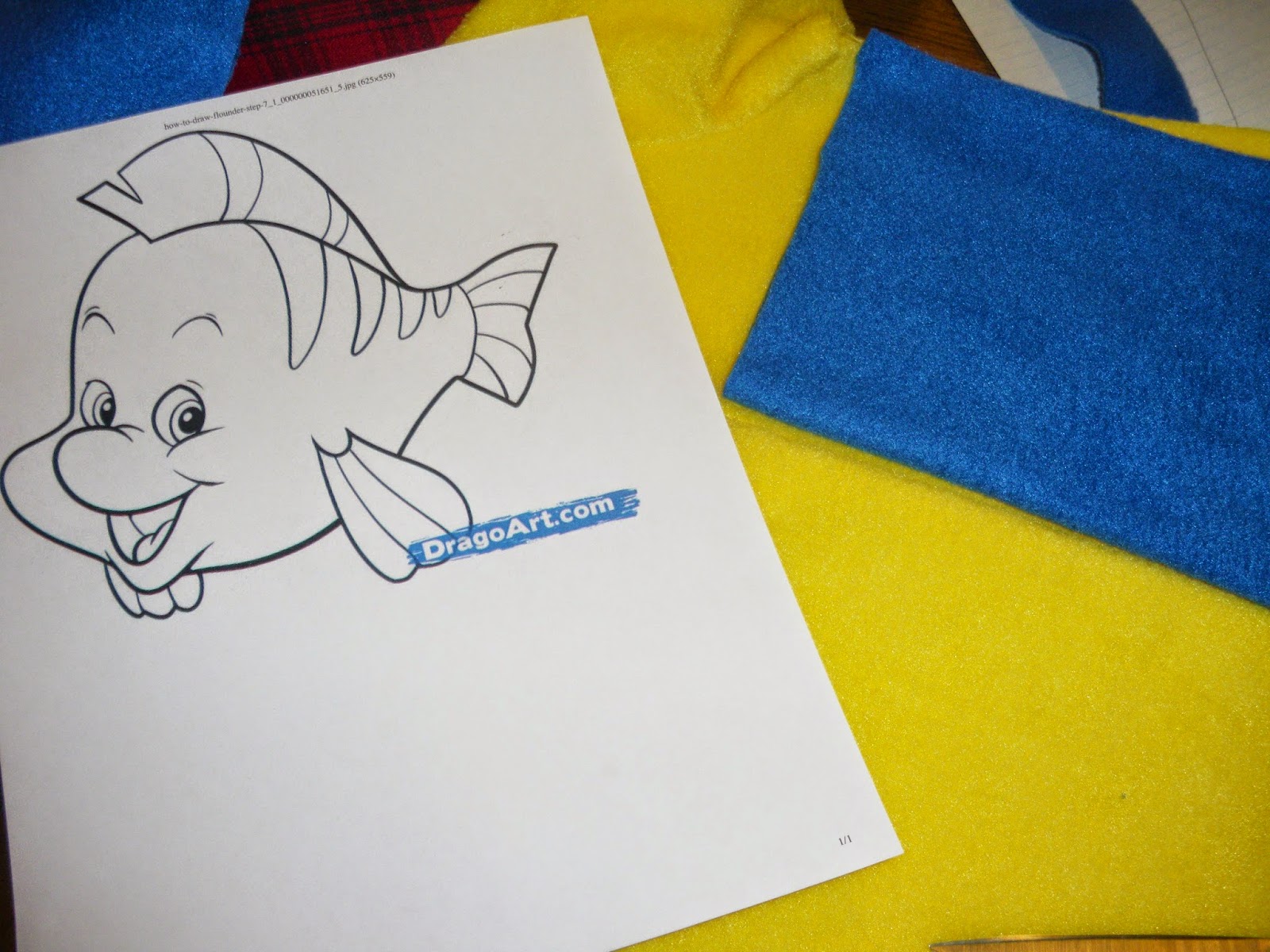 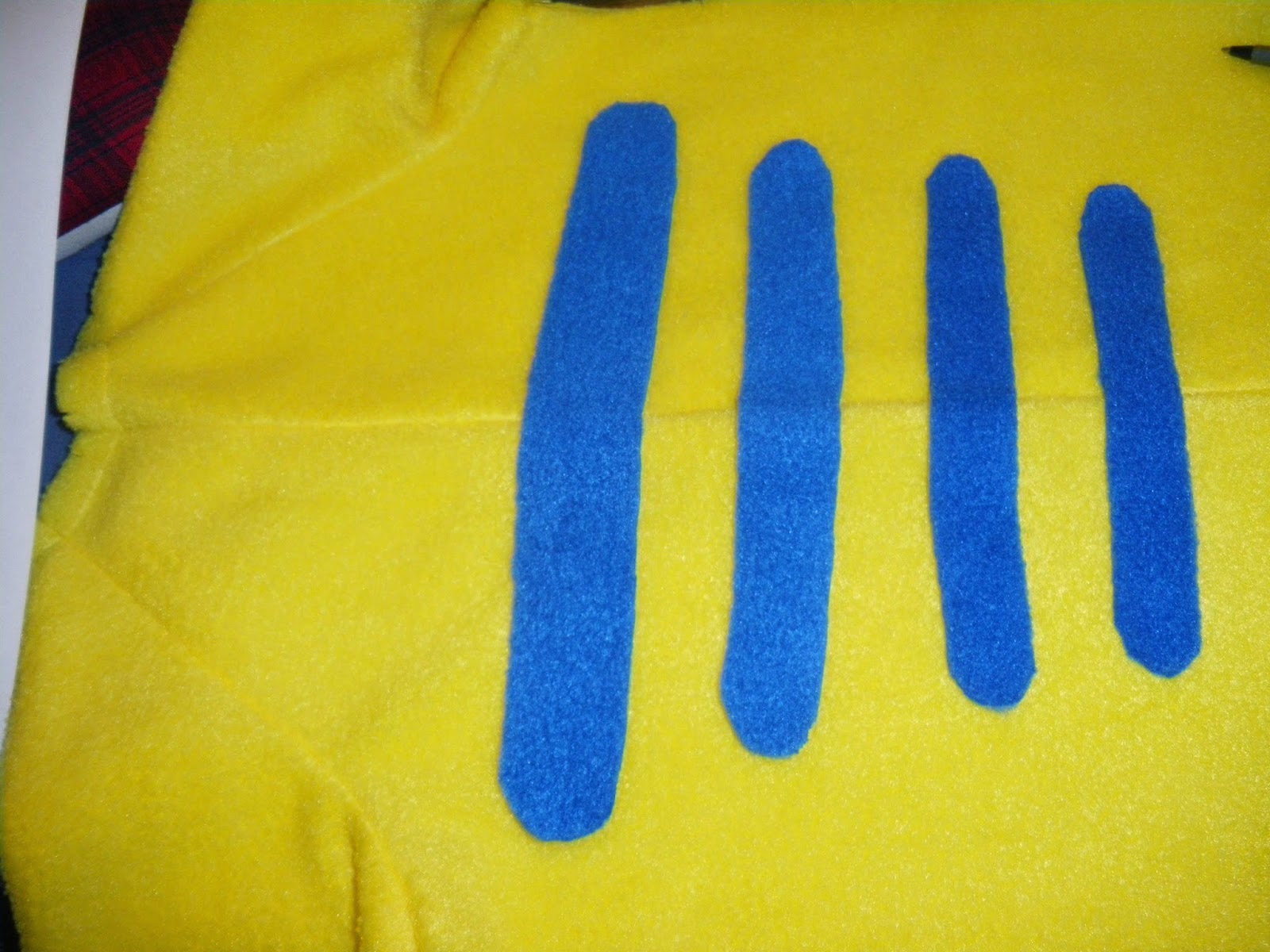 I printed a picture of Flounder to use to help me get an idea of how to arrange the back markings. I simply cut strips of blue fleece on the fold. I was going to make a template, but I found it easier just to cut freehand. I trimmed the pieces as I felt necessary.


I used steam a seam & a press cloth (using a low temperature, fleece and irons are not friends!) so the markings wouldn't shift while I sewed them (maybe I would have been fine with just pins but I just love my steam a seam!!;) 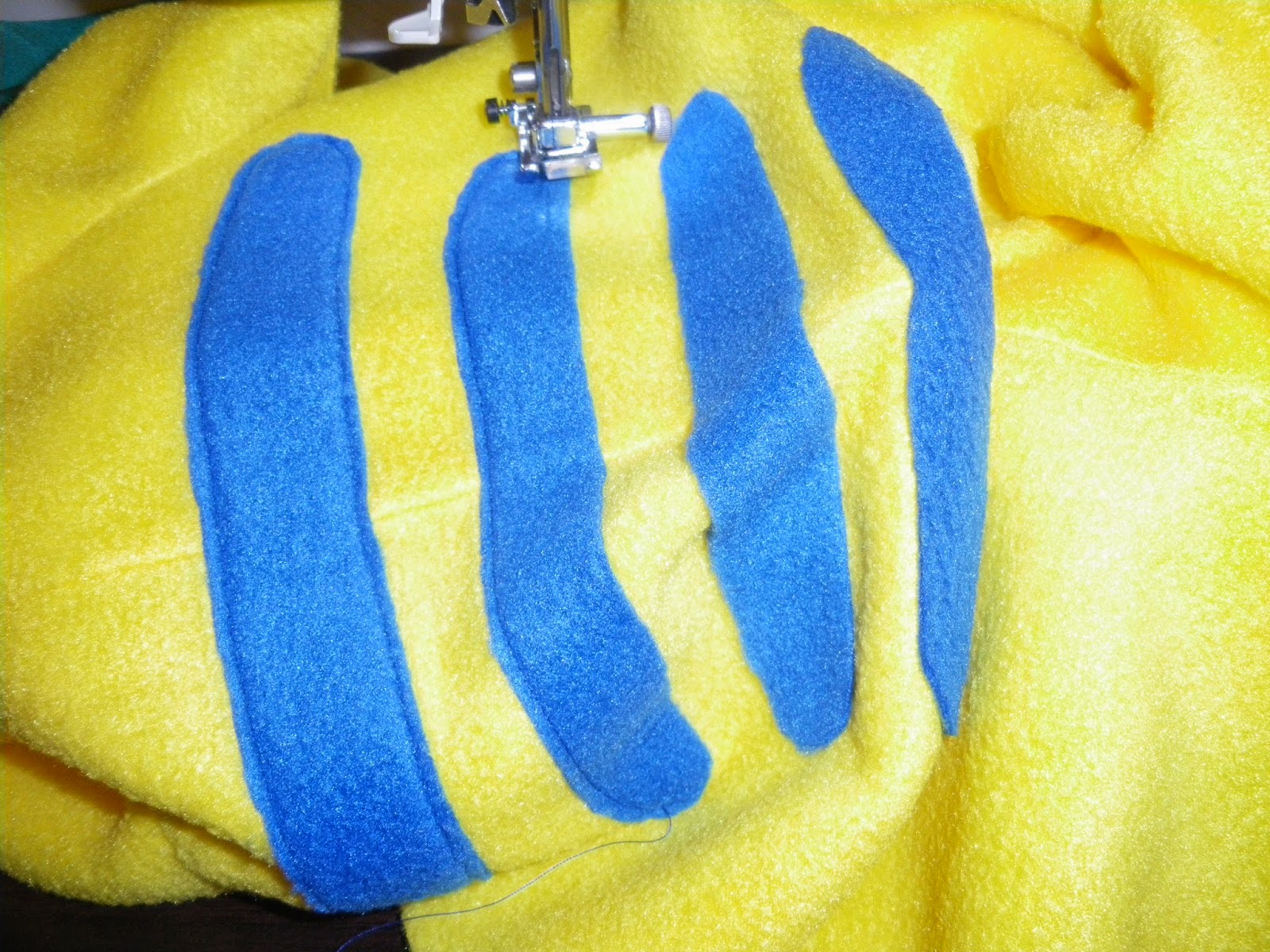 So, I *should have left a section of the centre back seam open so I could have sewn the tail into the seam, but I forgot! I used an overcast stitch too, so rather than unpick all those stitches, I did this instead... 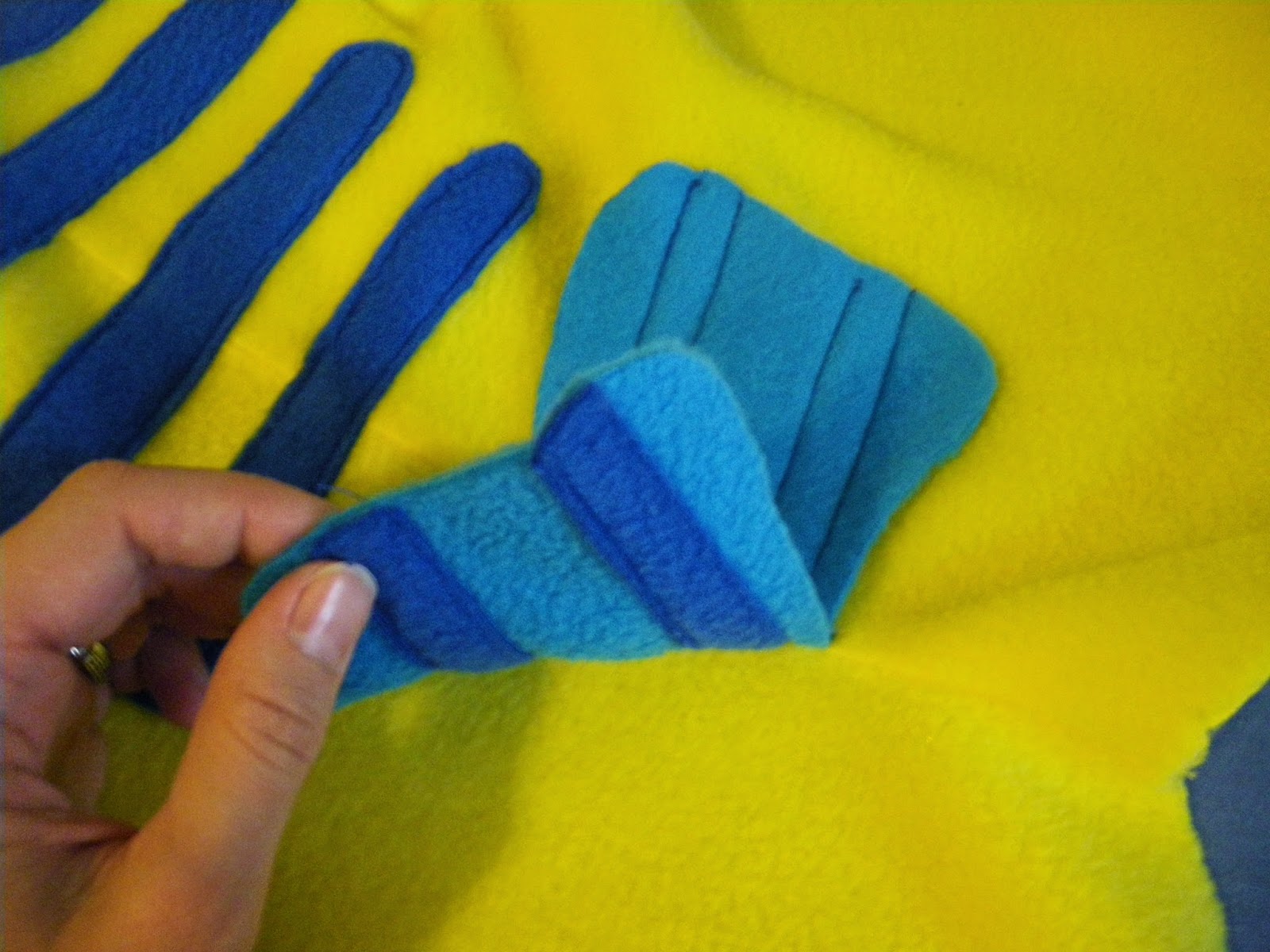 Here the tail fin is sewn to the back, right in the centre back seam. I used a piece of seam binding on the inside.

I pinned the tail "pieces" together and sewed around.


Sorry, this isn't the best photo. I'm sewing Flounder's "mohawk" fin into the hood seam. I just winged it, making a bigger fin than necessary, planning to trim it down to size later. More on that a bit later... 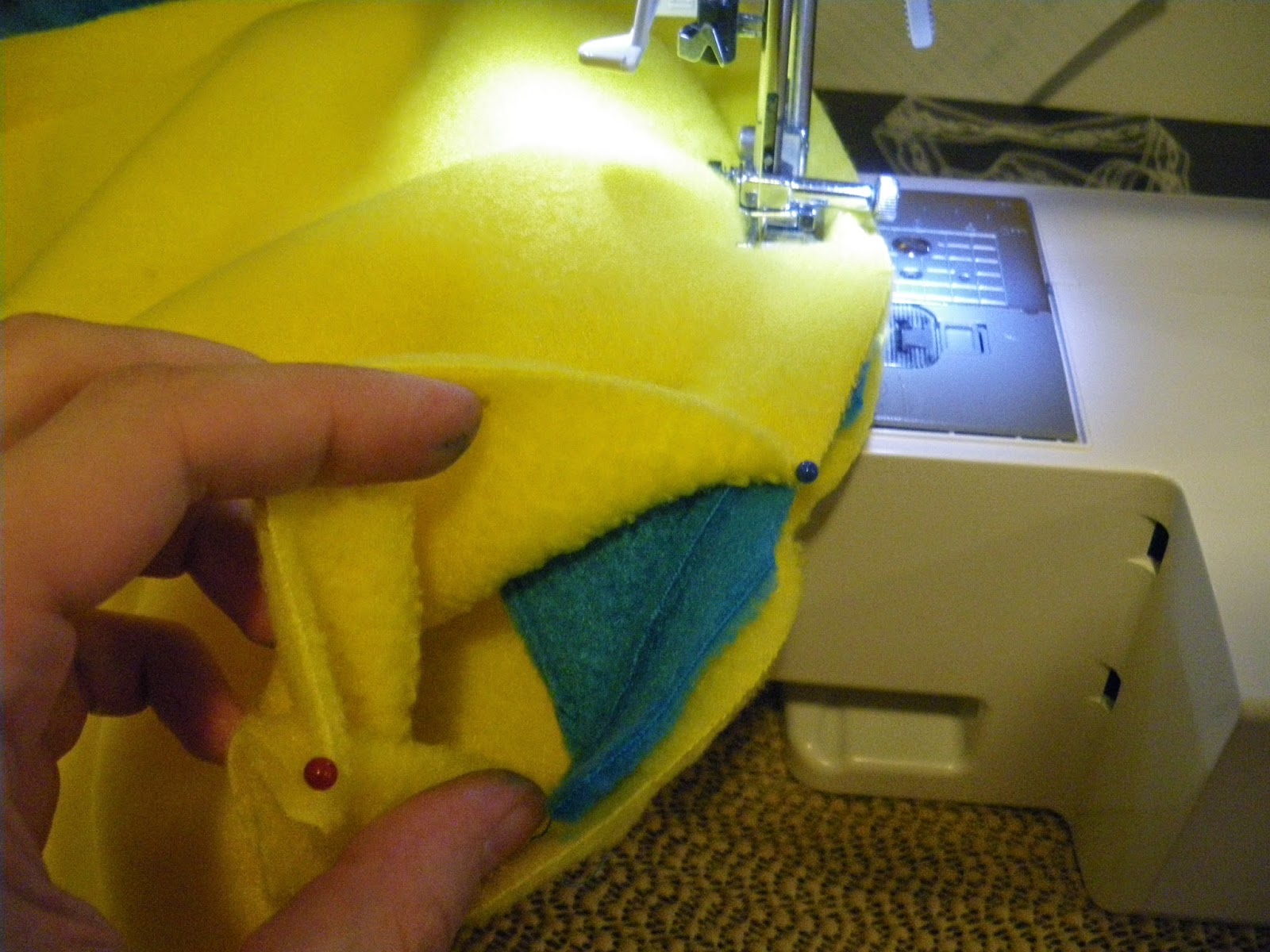 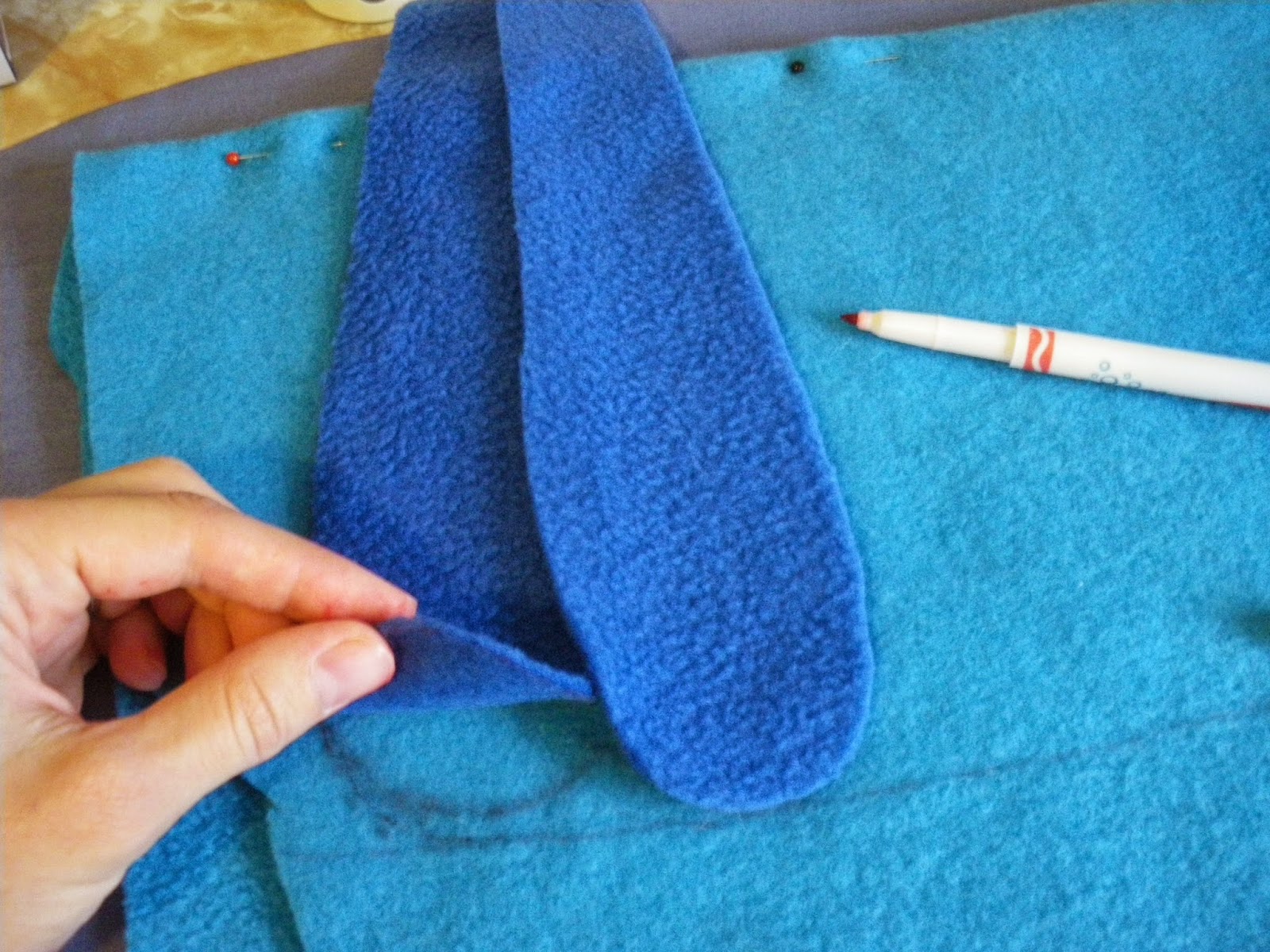 Here I used the middle section of Flounder's fin (drew & cut freehand) and put them together and traced to make the bigger light blue part. I thought it would help make it more symmetrical. The light blue fleece is cut on the fold. I extended the middle piece, intending to trim off the excess later.

Note: I should have used a fabric marker, as Crayola washable markers bled onto my hands & sewing machine. Washes off easily, just annoying! 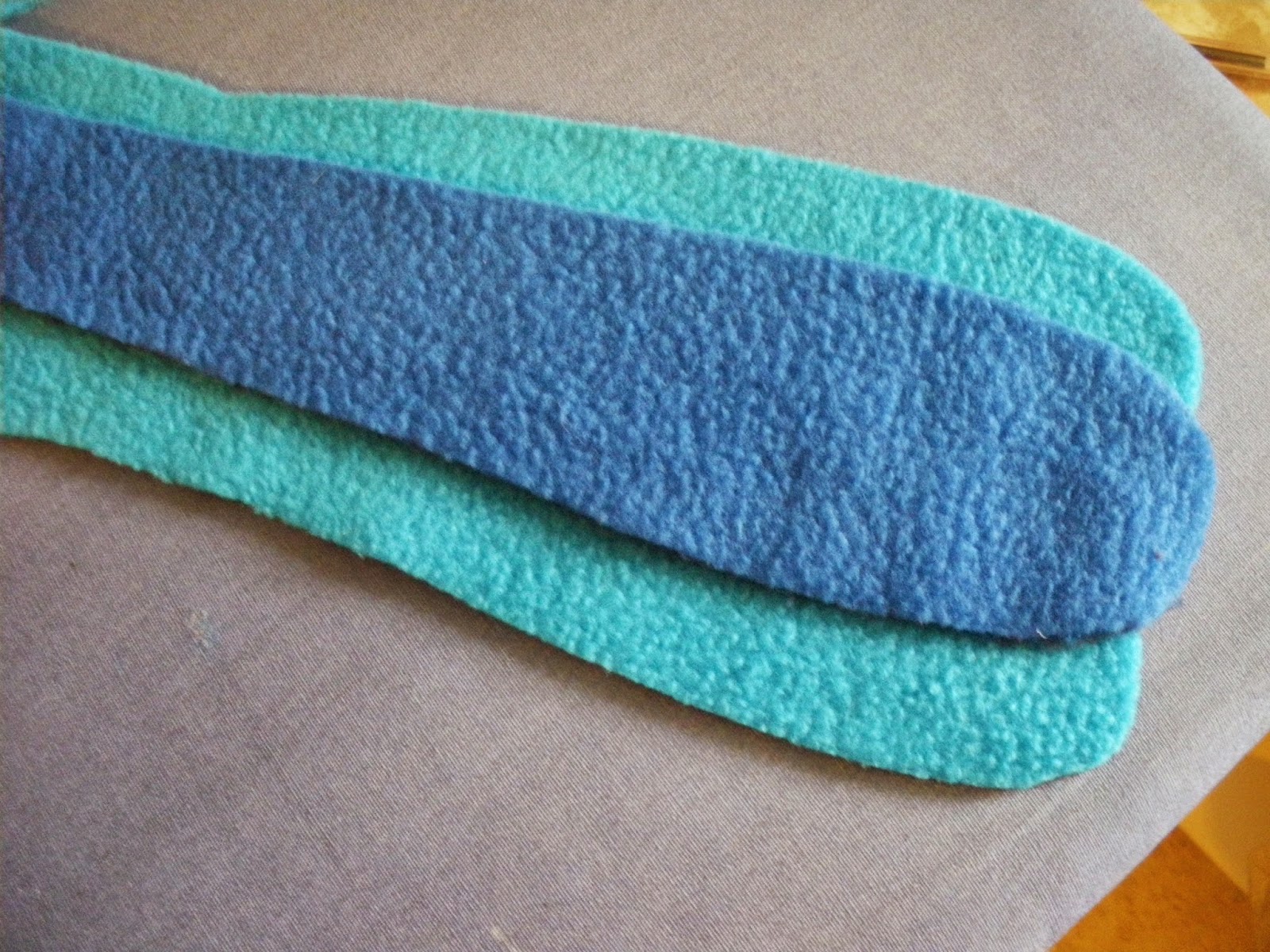 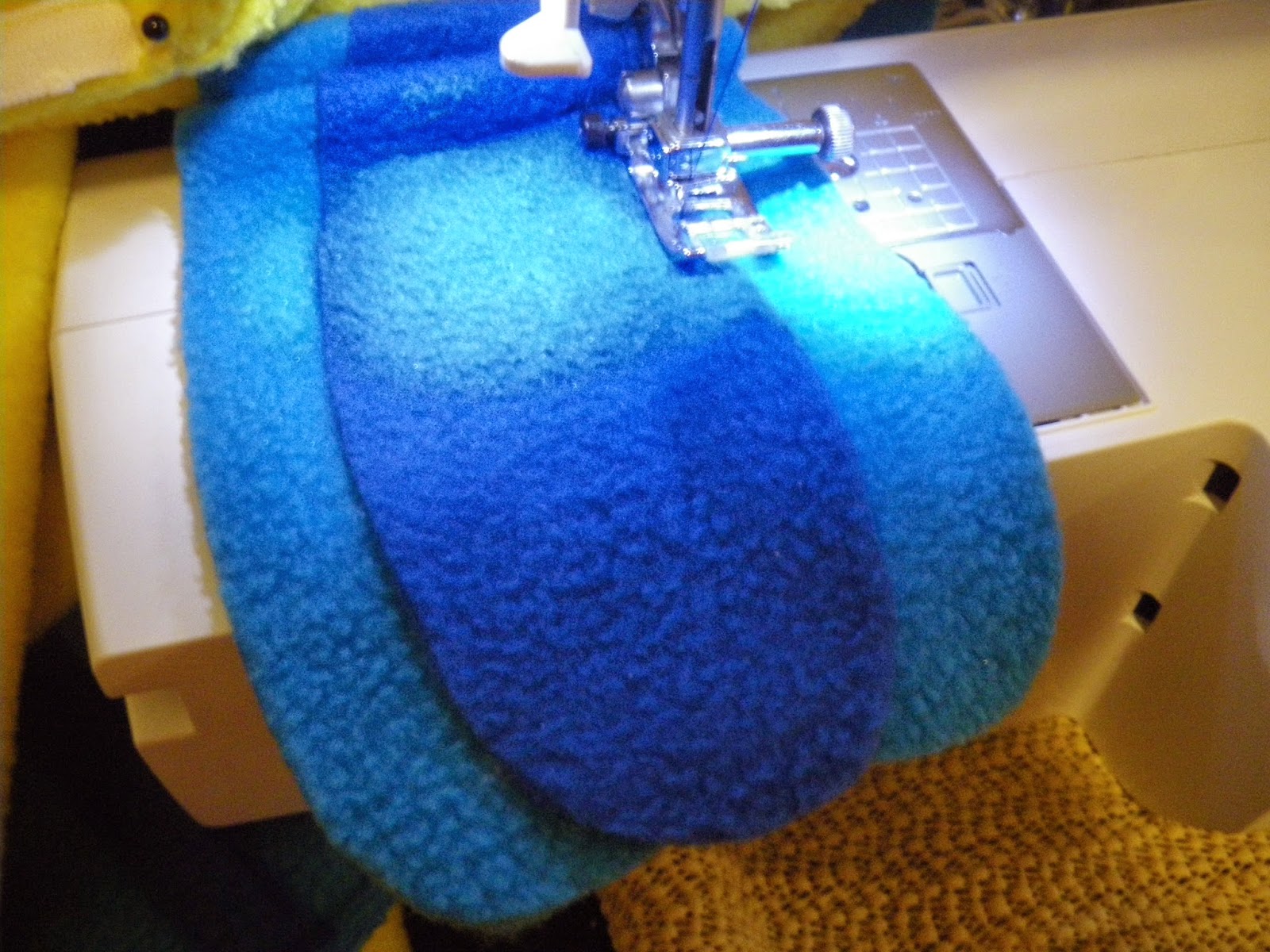 Sewing around the middle section (starting and finishing on the "fold line" to secure:) There will be a little section of the dark blue piece that is free, will be trimmed later.

I basted the front & back of the costume together
so I could both check the fit and "fin" placement:)
Isn't he sweet!!?:) 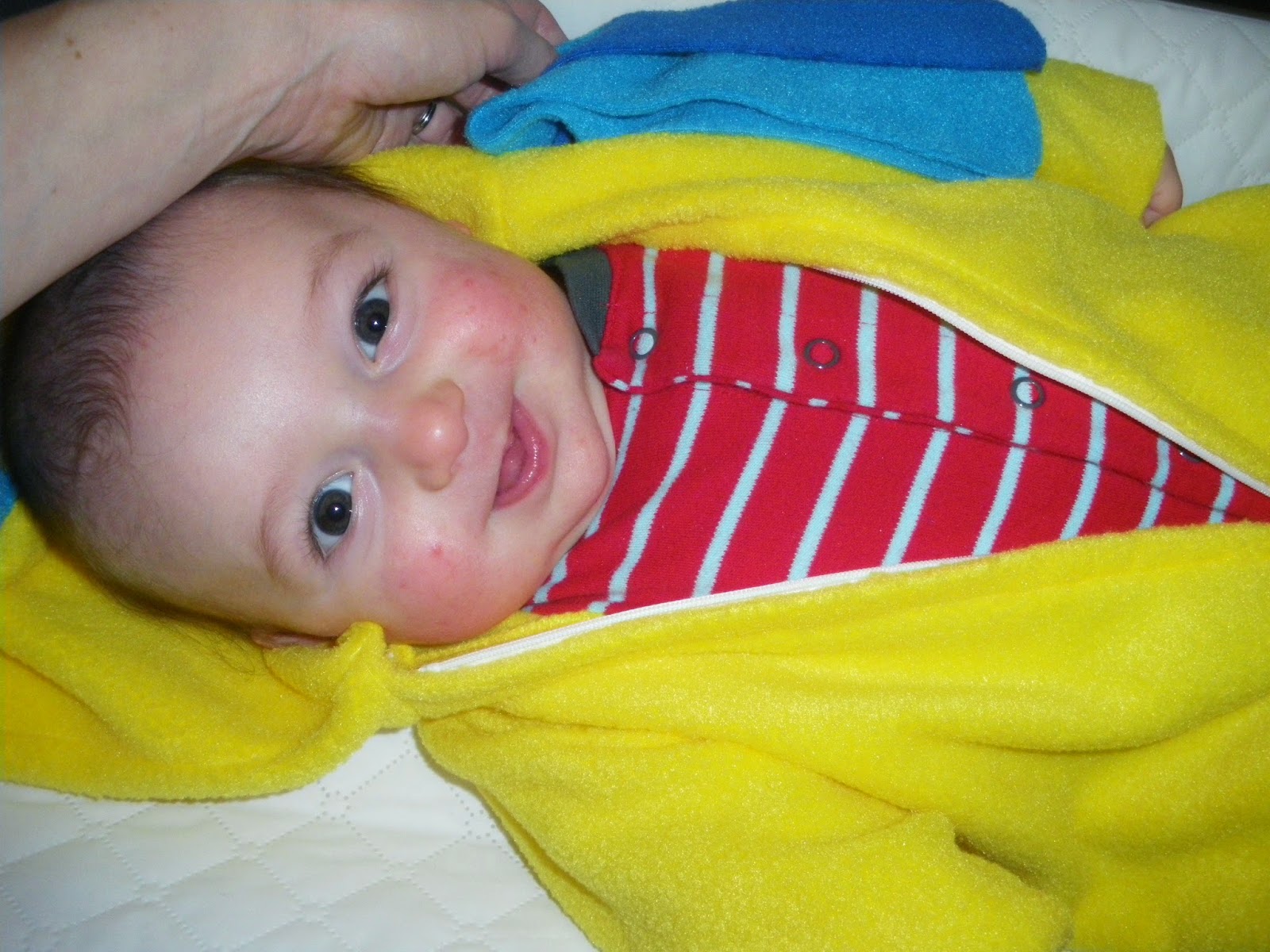 I marked the inside of the fin, where I wanted the
line of stitching to be, with chalk. 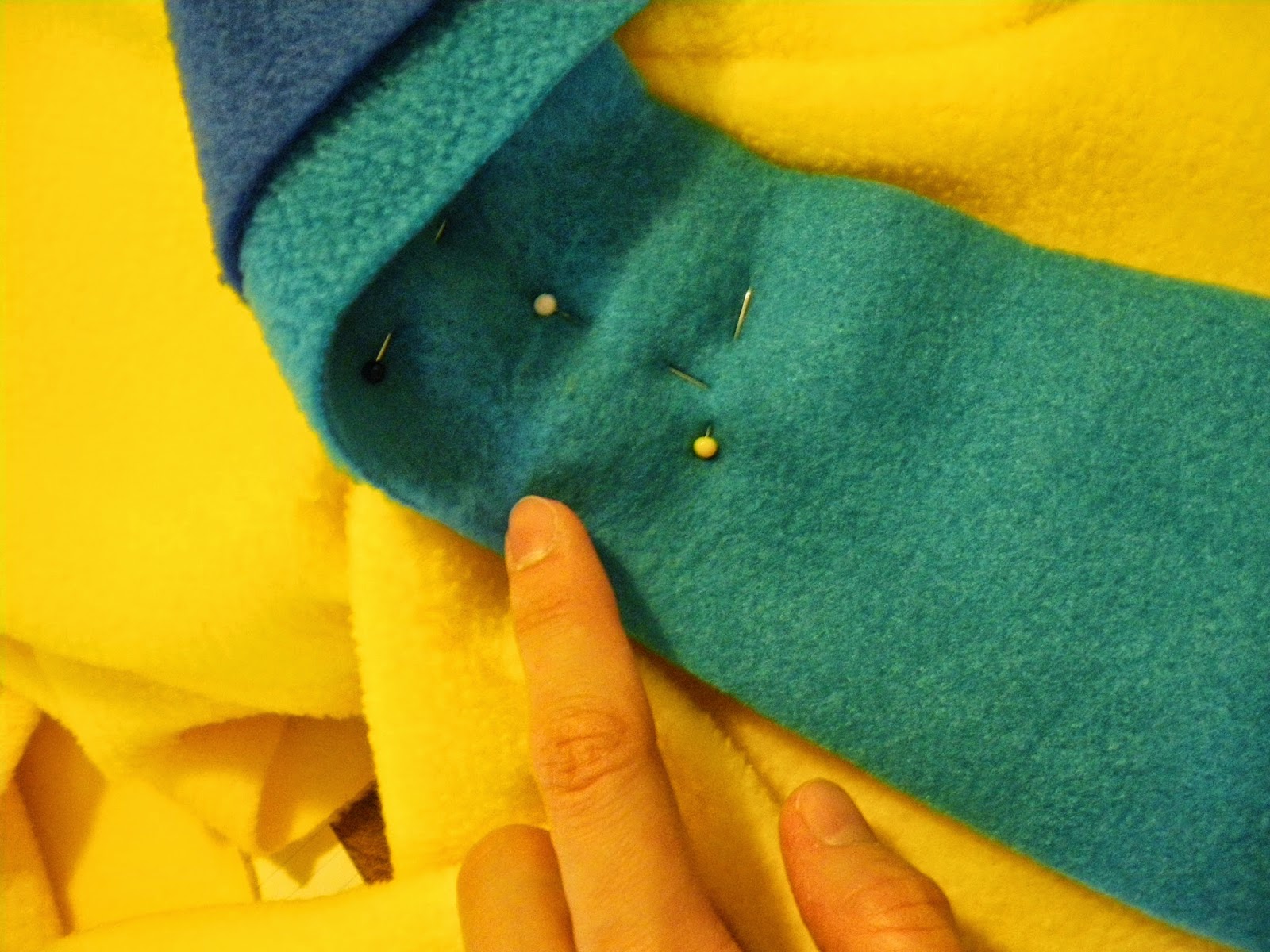 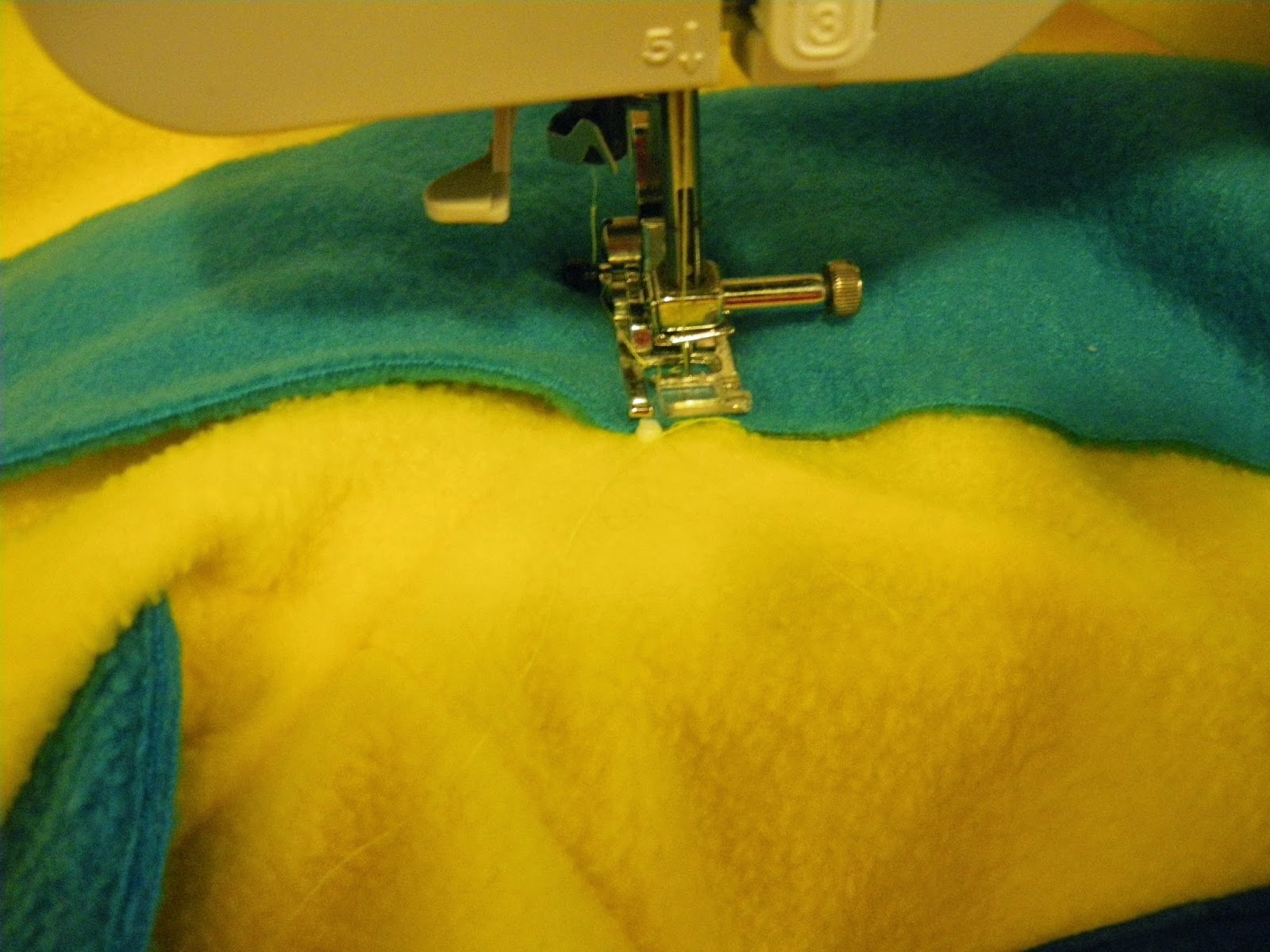 I didn't take a photo, but I pinned the two flaps together and sewed around the fin to make it on piece. 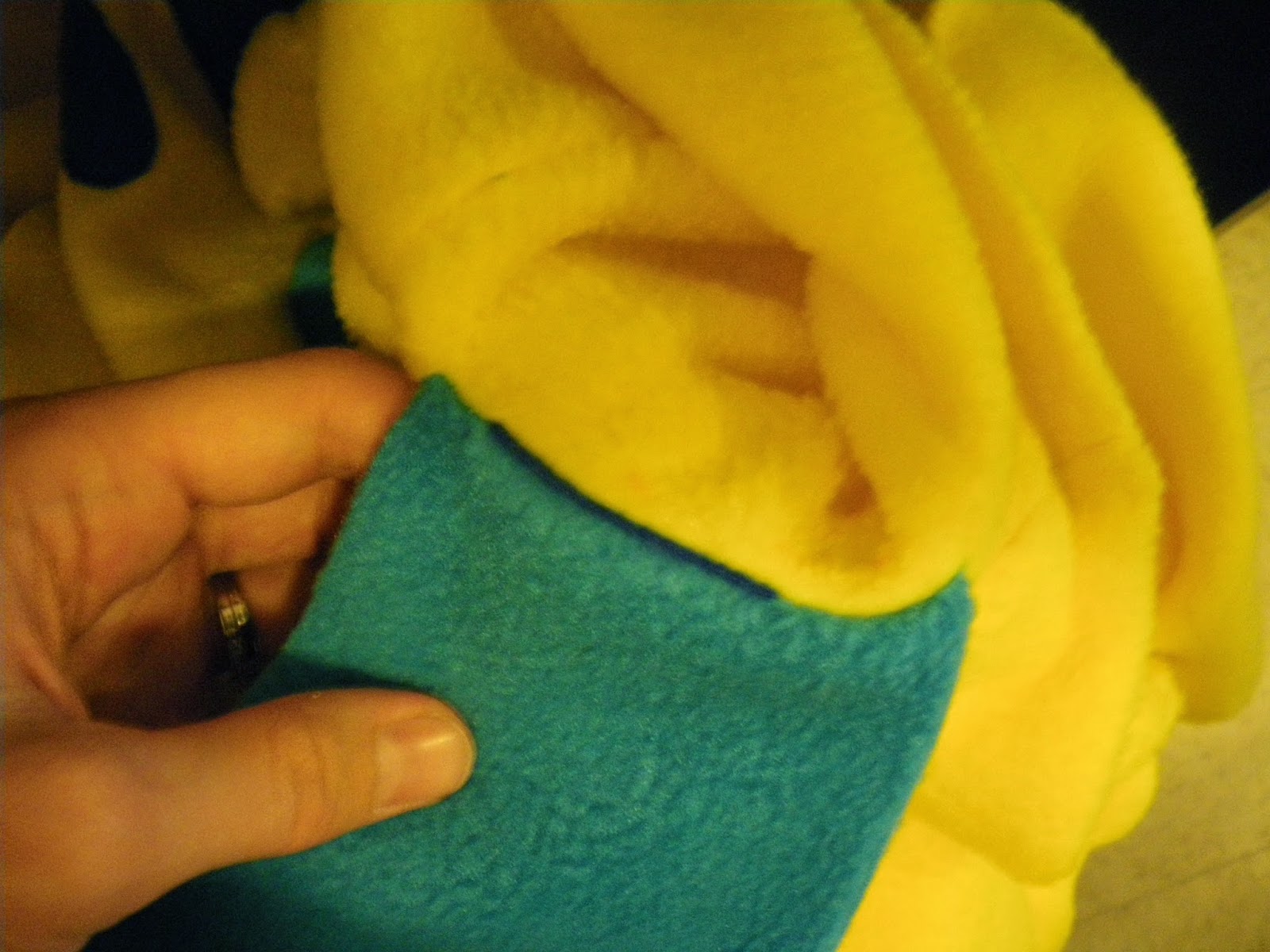 Dark blue middle part on the underside is trimmed away since I only wanted it to show on the upside:) 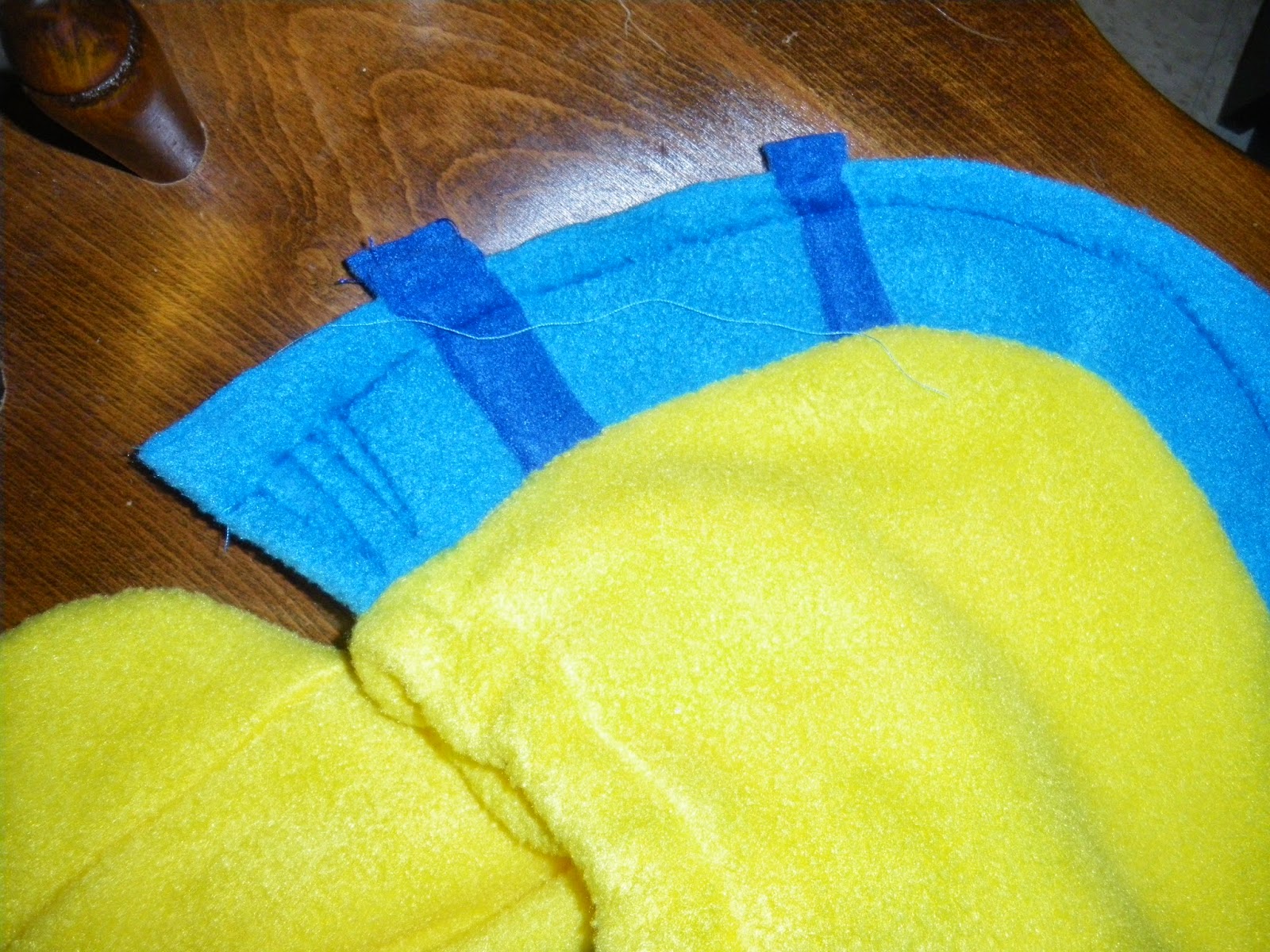 Here I drew freehand, on Flounder's mohawk fin, and sewed along the marks, a couple of times, and trimmed the excess carefully... 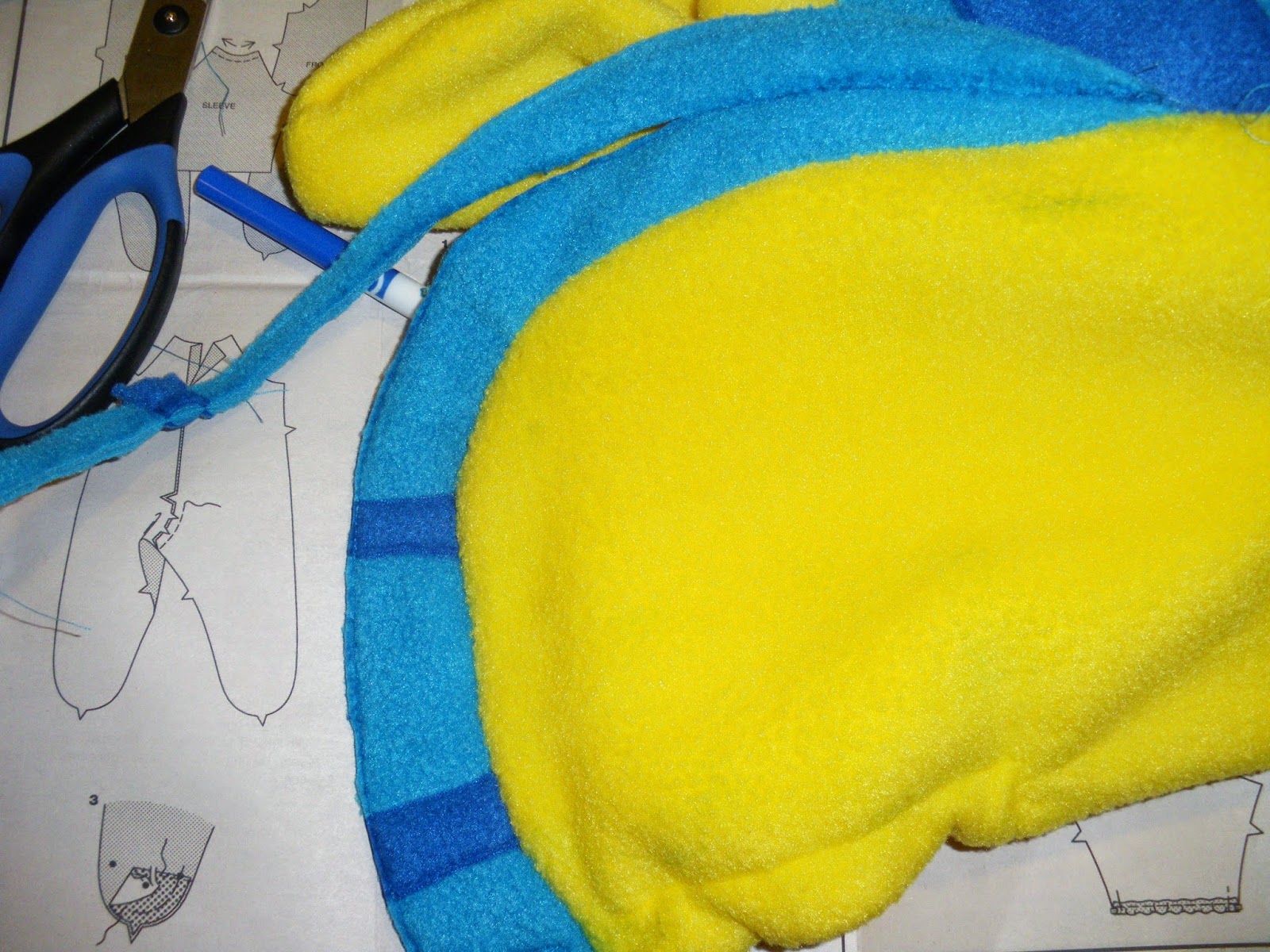 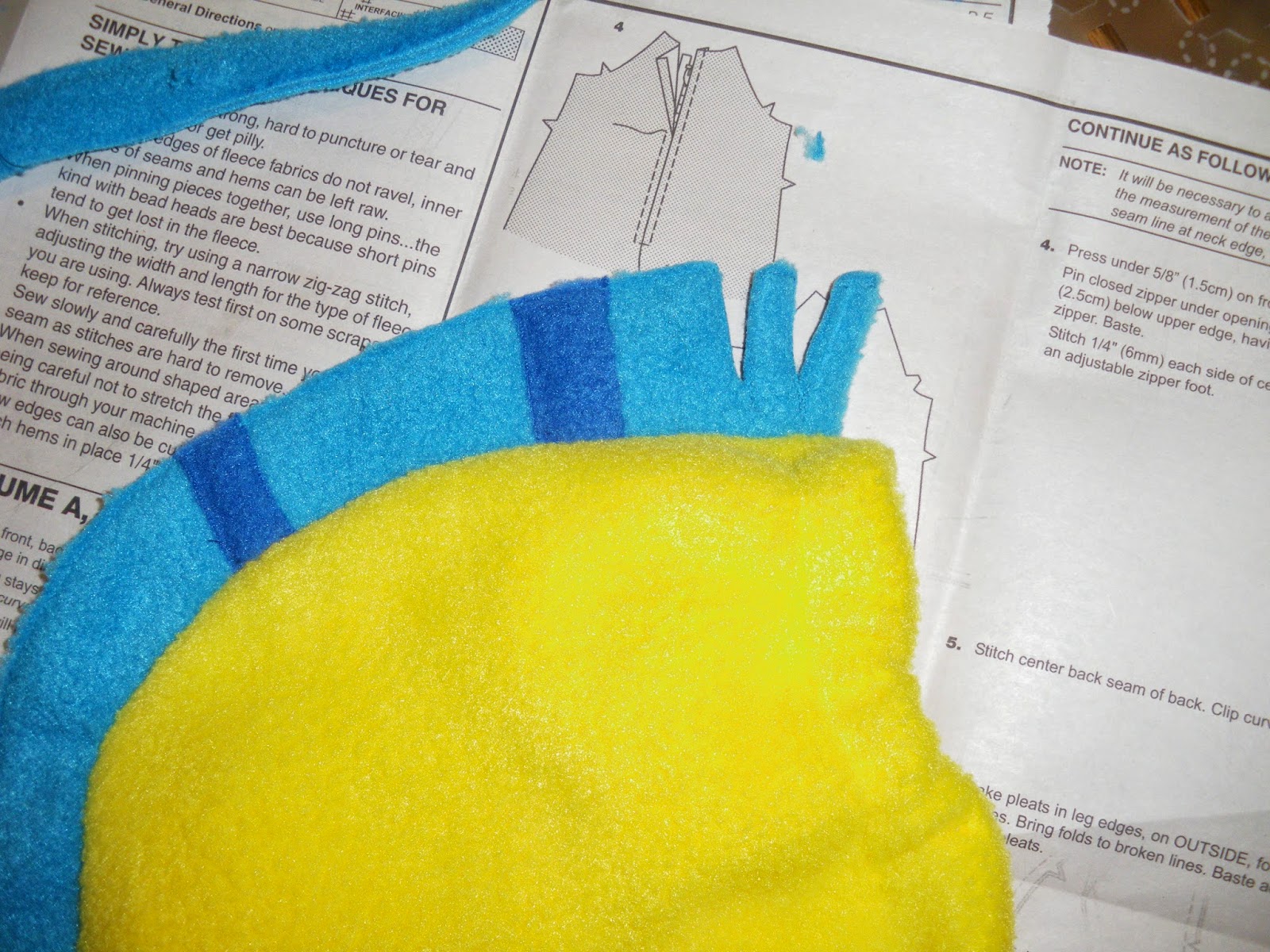 I used a smaller seam allowance to join the front and back pieces, as I was concerned it might be too small. I'll probably sew around it again closer to Halloween. 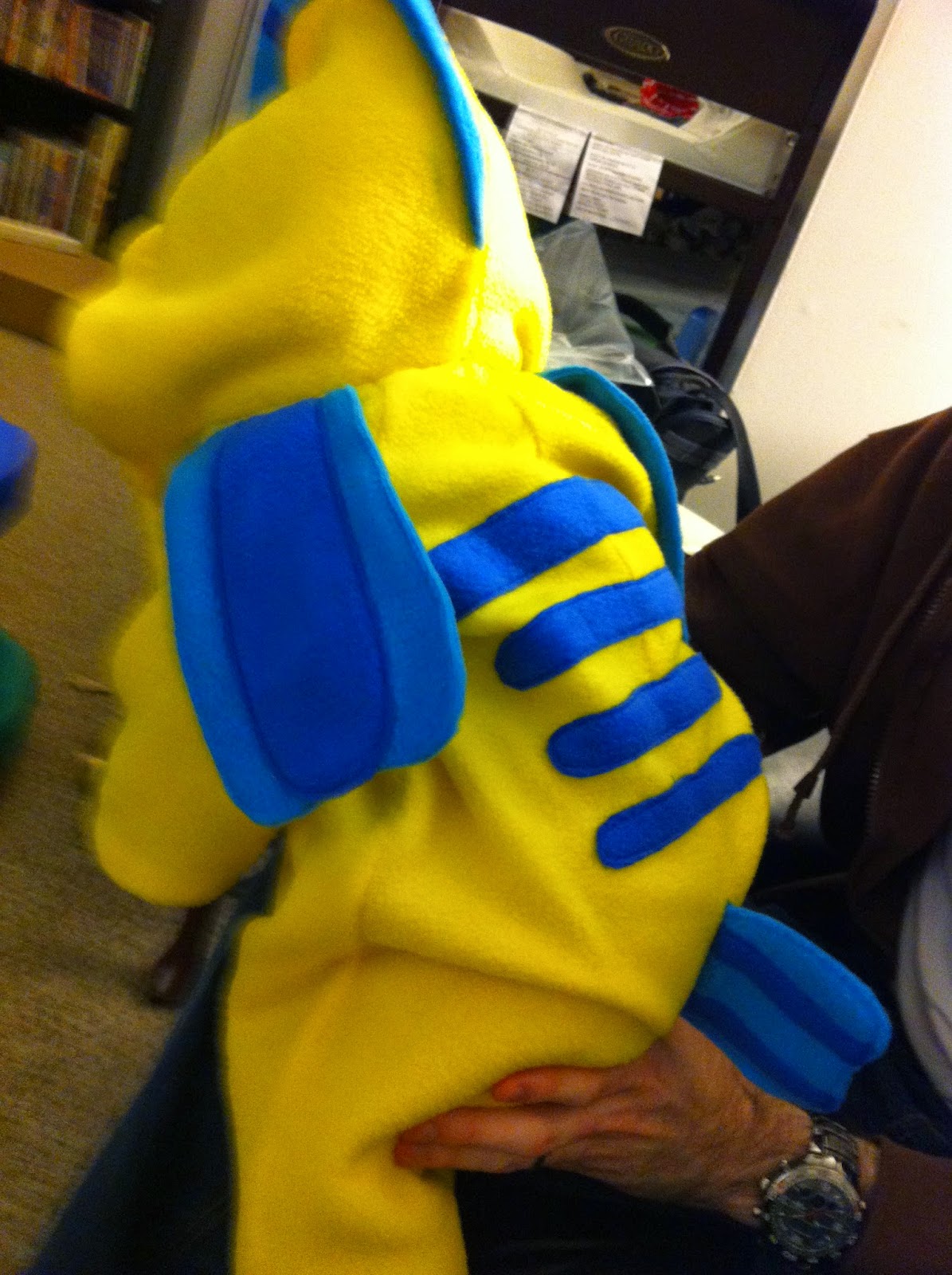 So there you have it! In hindsight, it would have been simpler to construct all the fins and then sew them into the seams, but oh well, I was making this up as I went & it turned out ok I think. :)