How fun are we?!:) As a kid, I loved to dress up for Trick or Treating every year. As an adult, I don't have to wait 'til Halloween to collect candy from the neighbours anymore, I can just go out and buy it whenever the mood strikes me (like today for instance, can't resist those cute little chocolate bars, especially @ 50% off!:) However, the dressing up part, I just recently got back into the last few years. I think couple's theme's are fun! Last year Dan and I went the "Batman" route (although, he was the more recent Heath Ledger-style Joker, and I couldn't resist making a Cat-woman outfit in the style of the gorgeous Julie Newmar, from the 60's Batman TV show. Don't we make a splendid couple?;)

Ok, back to the present!:) Here's some more photo's in my Little Red costume:) My review on P.R, here. 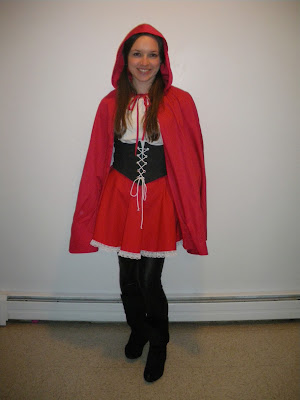 I knew last year that I wanted to be "Little Red Riding Hood". Dan was such a sport to be the Wolf. We purchased his wolf costume and the night gown,  and I made his night cap. We came across one ready-made but it would've cost $15! For a night cap! It seemed simple enough, so I figured I could just "Google" it and make one myself (times such as this I'm glad I can sew:) And Google it, I did. However, there are not a great amount of tutorials on the web (no surprise I suppose, how many people wear nightcaps these days??), but I did find some good instructions on ehow.com. So I took some photos to show what I did (with some changes of course:) It was really easy, and surprisingly fast (for me at least, I'm not the fastest sewer!;)

I don't want to make this into a ridiculously long post but I would like to include a few things I learned along the way. I started this costume in the beginning of September and I'm very glad I did, because it was a lot of pieces! Cape, shirt, vest, skirt & petticoat, whew! I was SO glad to be done (the day of the party of course!). Warning: Do NOT start this last minute! Do yourself a favour and start early (for your sanity:)

This pattern is pretty easy, but as I said, it takes time as there are quite a few parts. The cape was very easy. A couple of changes, I lined the hood and used self-fabric ties instead of ribbon.

The shirt I actually used a New Look peasant blouse pattern instead of the one included with this costume. I wanted to wear this outfit both to the costume party and to my work. It can get pretty chilly where I'm at, so I wanted a long-sleeved shirt (although short-sleeved looks more authentic). The cape kept me quite warm, which was nice:)

Next up is the vest...with grommets. The pattern doesn't tell you what size to use, so I settled on 5/16" grommets. The pattern photo only shown 8 grommets whereas the pattern instructions have 12! I just eyeballed where I wanted the grommets to be and used a dressmaker's pencil to mark inside the grommet circle. Also I must note that the pattern cover picture of the vest looks as though the front forms an upside down "V" at the bottom, but the instruction illustrations show differently (as you can see on my vest). 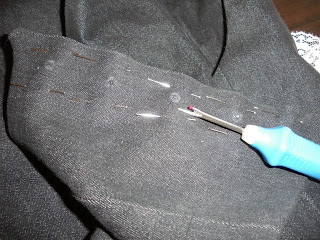 Shown here to the right, I used a seam ripper to get me started on the holes and used snips to cut just inside the circle to make an opening for one of the grommet pieces to go through. 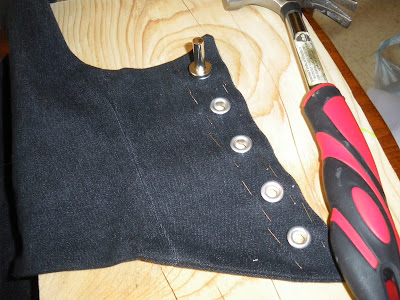 Here's how not to do grommets, and that's using the grommet tool on the right side of the vest! I did and then saw that the grommets do not stay in that way! 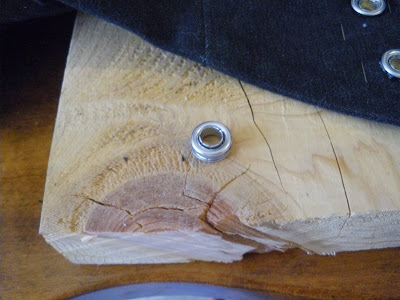 Here's how you're supposed to hit the grommet, on the wrong side of the vest. It was easy enough to fix. Just had to flip the vest over and put the grommet tool over the grommet and hit it with the hammer.

Note: don't go crazy with the hammer (see the marks on my board) or your grommets may get a little bent (like some of mine did!:( Oh well, I don't think anybody noticed! It's a costume anyhow:) 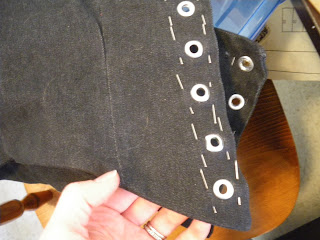 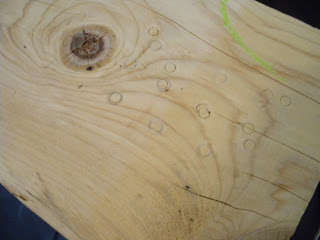 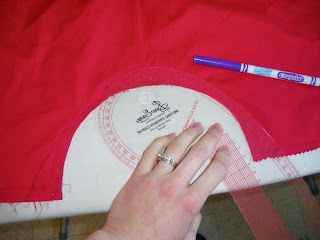 Last was the skirt. Please note: the waist for the circle skirt is very small! I used the 12 for the skirt (I used the size 10 for the vest) and it was way too small! I used a curved ruler to enlarge the waist. Worked pretty good, although I should have made the opening more "circle" shaped because it affected the closure, but still wearable:) 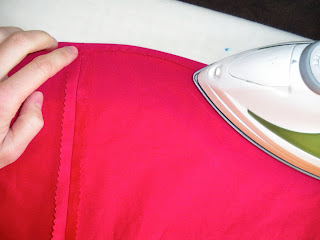 In  hemming the very wide circle skirt, I simply pressed the hem allowance (I did about 1/4")  and added the gathered lace trim (below). 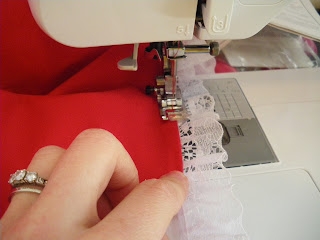 I'm not sure what the directions on the pattern say, but I just applied the lace trim as I was sewing (no pins). I made sure the lace was under the edge of the hem of the circle skirt so the stitching would catch both layers:)


Again, here's the finished result:)  Till next year! 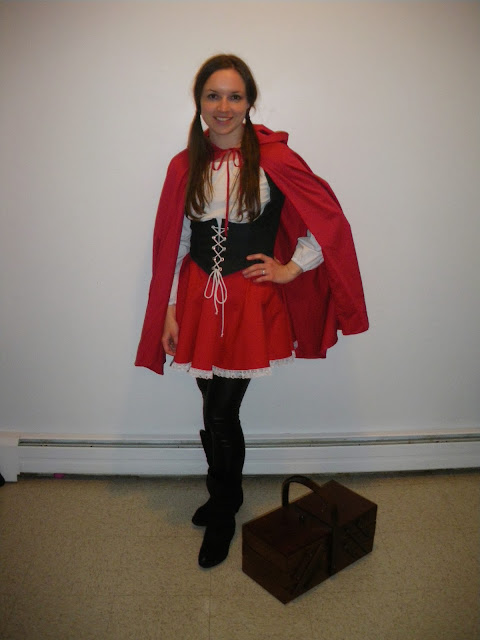